March 10, 2019
Hi, this is my IOC from the passage The Handmaid's Tale.
Post a Comment
Read more 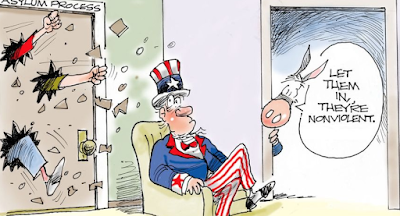 The Washington Times, The Washington Times, www.washingtontimes.com/cartoons/immigration/ What I can see from this cartoon is some people are trying to get in America in a very violent way. The donkey says: " Let them in, They are nonviolent." it is very not true that we can see there are some people broke the door. They represent the evil side. On the surface, I can see that uncle sam is not happy with them but I believe he is not happy with it. We all know that Many and many people were trying to immigrate to America and the author is trying to tell us the truth from the past or present. T he Democratic party seems very happy to see them and he is trying to convince uncle sam. The cartoonist conveys the messages that The Democratic party is playing a role of the liar. Because the fact is totally opposite to what he says, those people use their fists and legs to get into the room and the donkey says they come in a nonviolent way. The cartoon implies that the immigrant
Post a Comment
Read more

November 28, 2018
We analyze two texts, one was a cartoon and the other one was a story. I talked about the problem with the cartoon and the story and I describe the themes.   I did talk about the main idea and the difference and the similarity between the cartoon and the story. After I done the peer review, I knew where I am supposed to improve and get a higher grade. I did not write down the conclusion and I also had a lot of grammar mistakes. Even though my work is organized, but the unclear points can affect a lot of my grade. The language I used in the paper is not formal, there were a lot of words I used is Inappropriate. So I got 8/40, this grade is lower than the standard, I did out some efforts inside it, but I think I can do better than this time since I know where to improve.    What I should do for my future paper or assignment, I should add a conclusion and write more than my original work. Besides, I need to avoid grammar mistakes, it is probably the hardest thing for me to do, but for
Post a Comment
Read more

October 14, 2018
I think the major difference between these two blogs is the gender of models. My perception did not change after I saw the second advertisement, because I feel like the second of is quite similar to the first advertisement. When I saw the first one I think it symbolizes energetic and happy, because of this little model boy is smiling and the pattern of his shirt is very funny. But after I saw the second one, I feel like this advertisement is quieter and the pattern of her sweater and shirt is more formal compared with the first one. I am okay with these two ads. I didn't see any sexist and offensive through these two ads. I think they are using two genders as ads. because this brand is not just for male or female, they do produce both genders. So I think this is the reason why they used two genders as their ads. I think we just need to accept that because this is something very we can't change.   Overall, I like these ads. they made, they used male and female as a different
Post a Comment
Read more 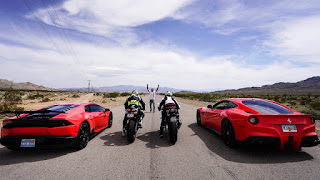 Nowadays, people are getting more and more stressful than they used to, including me. As a student, every holiday will be the time I very enjoy it. Because I can do whatever I want and relax. So I think the happiest time is when I can do the thing I want to do. I really like the idea of the national happiest index, because it can tell the happy index of every citizen and let the government know what they are supposed to improve. I think the best way to measure it is to see the GDP. because money can tell the happiness of a family, so which mean one family's incomes are higher, they are having a happy life.   From the article "I have been called a Luddite" I feel like technology can affect people's lives, and it is a very important thing to know. I would say I agree with it.   "But will it make you happy?" is an article from the NY time. In this article, the author talks about the interaction between incomes and happiness index. Which mean if someone makes
Post a Comment
Read more 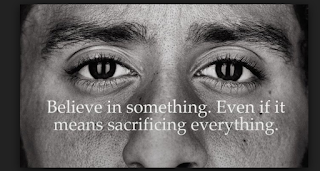 https://www.youtube.com/watch?v=Fq2CvmgoO7I   The speaker of this advertisement is a famous football player name is Colin Kaepernick. This ad. speaks to people who have gotten different treats or different views from other people. In America, people have different colors, and many blacks get discrimination from other people. Also, people who lost their legs or arms will get discrimination as well. The background music they used is very inspiring, and I can see a lot of sights are about some disabled person did something to exceed their abilities, because they have a dream. The logo they were using is Swoosh and the shape of it looks like a hook. I believe they used " just do it" as their ethos. In this commercial, they used a lot of famous people as their model in order to tell people it doesn't matter even though you have not advantaged at all. So they used this kind of thing to convince customers to buy their products. I feel like they appeal that Nike shoes are
Post a Comment
Read more
More posts

Justin
Hi, My name is Justin, I am an international student who is studying in a small IB. world school in the United States.